Cancel dialog text. Is this good?

I have a dialog that comes up when someone cancels creating a new piece of data. 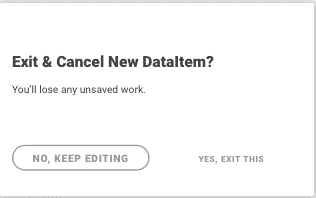 I’m worried this is confusing. What do you think?

Generally, while I understand you want to avoid people cancelling unintentionally, I think the affirmative action should be the primary one. I would assume they want to cancel, and we ask them to confirm this for their sake.

Switching it around as in your example feels a bit threatening. It might give the sense of having done something wrong, instead of a friendly reminder…

Add colors to the buttons and you’ll be ok

It seems to me that color is not planned into the design language.

From an UX writing perspective, it’s almost fine in my opinion. I am not sure if the action intro needs a question mark, but since it’s also a dialog, questioning might be alright. Think about getting rid of the Ampersand (&), it looks cool and all, but not all users expect it in that context, since it’s mostly used in a noun combination like Research & Development or name branding like H&M. Also, does the user know what a DataItem is?

I don’t know the whole flow, maybe you can give information to the user to where they will return to by activating the exit button. So it also depends on when this dialog is coming up. Is it routine procedure to exit and cancel, or will the dialog pop up when the user is doing a mistake.

What I would think about is going straight into UI perspective: